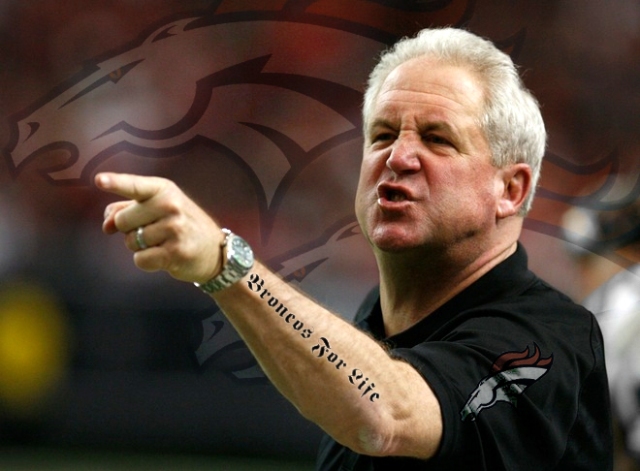 Forty-three days into the John Fox era in Denver, the head coach is showing a maturity missing with McDaniels. “Right now Kyle Orton is our starter,” Fox said. “We have a young guy, high draft pick, in Tim Tebow who got his feet wet last year toward the end of the season. And then shoot, Brady Quinn I’m looking forward to seeing.” I appreciate what already seems to be a sane and humble approach. The quarterback situation could have become an issue in the hands of a hothead like McDaniels. I haven’t heard what the diehard Tebow fans think, but it sounds like they’re getting a year of Orton whether they like it or not.

Even Tebow sounds humble and mature this offseason. Regular season games were “just so much different than practice, especially the ones where I was watching [Orton] go through all the reads. I’m just glad I finally got a chance to do it myself in live game situations.” It looks like the Broncos are going to keep both QBs on the roster. Tebow may never be worth the three draft picks the team gave up to get him, but at this point, this is the best possible course of action for the team to take.

On defense, the Broncos say they will be switching back to a 4-3 front after two years of mixed results in a 3-4. In all honesty, it doesn’t really matter which front the team uses, so long as they create opportunities for their star, Elvis Dumervil, to rush the passer. The Broncos defense was actually the 7th best defense in the league in their first year in a 3-4 under defensive coordinator Mike Nolan in 2009, before falling to 30th in 2010 after Nolan was let go. Considering that they were just 31st in 2008 and 23rd in 2007, I am inclined to believe that this is their true level of skill, and 2009 was a fluke.

In the same article, we’re given a rare example of a player speaking candidly with the media:

After signing his four-year extension this week, Broncos captain Champ Bailey said he didn’t think there would even be a season in 2011.

“Not really. I’ve been pessimistic about this thing from Day One. Ever since our union leader came and talked to us last year during the season, it just kind of opened my eyes like there might not be football,” Bailey said.

This is getting scary; I don’t like the idea of no football next season, and I don’t even stand to lose millions of dollars if there are no games. The owners seem to be getting older and more crotchety every day. They ought to remind themselves: nobody goes to games to see the owners. People watch the NFL to see the players. If no agreement can be reached, I hope the Player’s Association disbands, allowing the players to seek football elsewhere. I will happily start watching the CFL and UFL if that’s where the top professional talent goes, and then maybe the owners will remember where their place is and will give the players what they deserve.

EDIT: My mom doesn’t think there will be a lockout. “There will be a citizen’s revolt” without football, she says, “the government will intervene!” If the citizens didn’t take to the streets with pitchforks and torches due to the ineptitude of George W. Bush, would they for football?

… .
View all posts by Screwfloss →
This entry was posted in Uncategorized. Bookmark the permalink.